The Barber Vintage Motorsports Museum recently donated £10,000 to The Jim Clark Trust, a charity established in 1978 in the United Kingdom to celebrate the life and racing career of Jim Clark, OBE (1936-1968). To date, Clark is considered one of the greatest-ever Formula One racers. 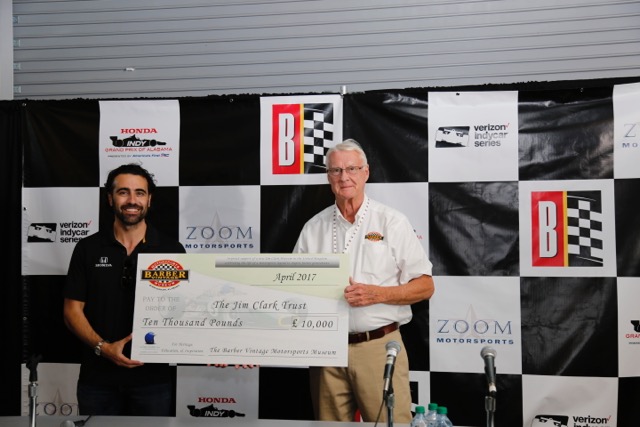 Dario Franchitti, MBE, a Patron of The Jim Clark Trust, as well as four-time US IndyCar Series Champion and three-time Indianapolis 500 winner, accepted the £10,000 check presented by George Barber on behalf of the Barber Museum, during a media event on April 22.

“On behalf of the Jim Clark Museum, I’m delighted to accept this very generous donation. It will go a long way towards our goal of funding the new, large museum in Duns, Scotland,” said Franchitti.

The Jim Clark Trust was started by his parents a decade after Clark lost his life in a racing accident in Hockenheim, Germany. During his too-brief racing career, Clark won 25 Grand Prix races and earned 33 Grand Prix pole positions. Along with establishing the trust, Clark’s parents gifted Jim Clark’s many Presentation Cups, Shields, and Trophies for public display in the town of Duns, located in the Scottish Borders, Scotland.

“Jim Clark was a true champion in every sense. Throughout his career, he raced and earned wins in Lotus and was a dear friend of Colin Chapman, the innovator behind the Lotus marque. The Barber Museum has enjoyed an enduring friendship with the Chapman family. We feel that supporting The Jim Clark Trust is a way to honor not only Jim Clark’s memory and Lotus history, but also the large family of motorsports fans around the world,” said Barber.

Over the past several decades, the Jim Clark Museum’s collection has grown to include donations of memorabilia from fellow drivers, family, and fans, to include photographs, newspaper and magazine articles, and books.

About the Barber Museum and Barber Motorsports Park:
The Barber Vintage Motorsports Museum is a 501(c)(3) Not for Profit Foundation located at the 880-acre Barber Motorsports Park, in Birmingham, Alabama, dedicated to the preservation, interpretation, exhibition, and history of motorcycles, vintage vehicles, and motorsports. Over the course of the past decade, the Barber Museum has brought people from around the world to Alabama, and it has been named the #1 tourist attraction in Birmingham. The museum is the home of the world’s largest motorcycle collection and is widely known for its collection of vintage Lotus racecars and other rare vehicles. Each year it hosts vintage motorcycle and vintage racecar events, including the Barber Vintage Festival and Barber Historics. For more information, visit www.barbermuseum.org.

The 880-acre Barber Motorsports Park, located in Birmingham, Alabama, features a challenging 2.38-mile, 17-turn racetrack that hosts motorcycle and car racing events throughout the year, including the Honda Indy Grand Prix of Alabama. Since the inception of Barber Motorsports Park in 2003, the Porsche Sport Driving School has been a partner and is North America’s only Official Porsche driving school. The park also features the Barber Proving Grounds, where Mercedes-Benz hosts the Mercedes Brand Immersion Experience for its employees. Zoom Motorsports, LLC is the exclusive event promoter for Barber Motorsports Park. In 2013, Jalopnik named Barber Motorsports Park one of the “10 Prettiest Racetracks in the World,” for reasons including the natural terrain track with elevation changes, safety considerations, and art. For more information, visit www.barbermotorsports.com.