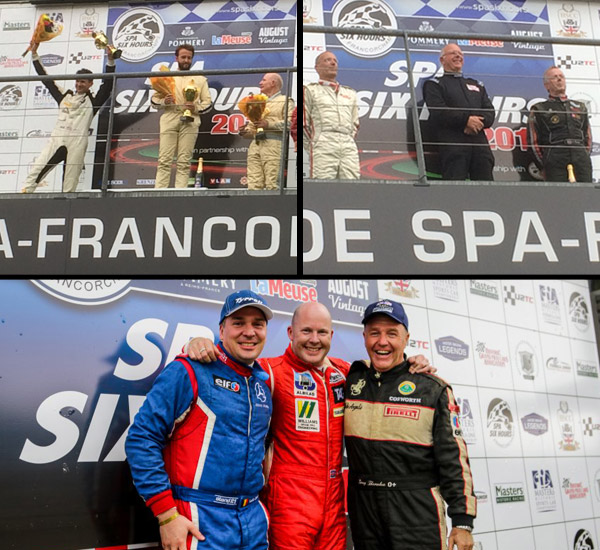 Andrew had a stunning weekend in his type 24.  Qualifying in 7th then making his way up to 4th in the first race and then making the all important overtake to claim the bottom step in the second race.  (Above right picture).

Charles started qualifying well in his type 18 but then developed a misfire which unfortunately lasted all weekend.  He still managed to finish 19th out of 30 cars on the grid.
See the full results on the HGPCA website

Andrew and Lee completed steady qualifying laps - Andrew in 11th and Lee in 8th.  Andrew managed to overtake Lee in the first race and finished just ahead of him in 7th.

Andrew took the second race steady and fell back a few places to 10th whilst Lee completely pulled it out of the bag and stormed to 2nd place taking his first podium with Classic Team Lotus with a staggering 38 cars on the grid - well done! (Above left picture).
See the full results on the Formula Junior website

Masters
Greg Thornton put on an impressive show along with Christophe d’Ansembourg (Williams FW07C).  The pair fought over third place lap after lap, Thornton finally passed the Belgian on lap 9.  Earlier on, before claiming the final podium position, Greg was continuously made to fight for fourth place, first by Steve Hartley (Arrows A4) – which ended in heartbreak for the latter – and then by Paolo Barilla (Williams FW07C), the Italian having fought his way up to fifth after passing Mike Cantillon’s Tyrrell 010 and Simon Fish in the Ensign N180.
Read the full report on the Masters website