Jim Clark Weekend gets revved up

13/05/15 - Allan McNish is looking for motorsport fans to turn out in numbers this weekend to celebrate the legacy and inspiration of one of the nation’s greatest sporting heroes, Jim Clark 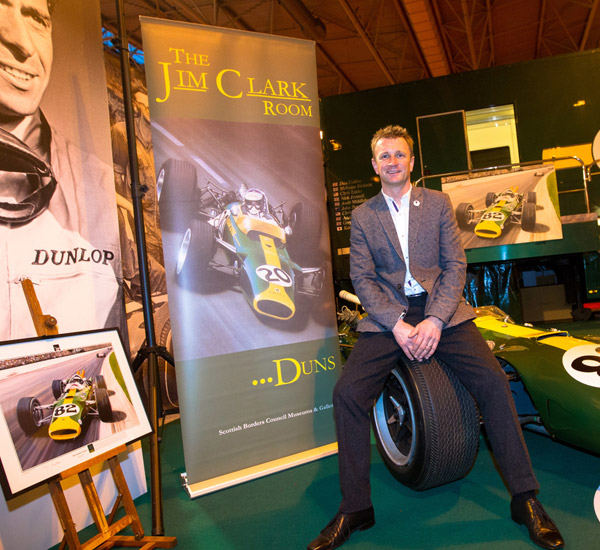 Triple Le Mans 24 Hour race winner, 2013 FIA World Endurance Champion and ex-Formula One driver Allan McNish, will return to Scotland to join celebrations at the Jim Clark Weekend on Sunday 17 May. The event takes place over the weekend of 16 & 17 May with a static display of cars on the Saturday and the main event with a parade of race cars on Sunday.

The free public event organised by Club Lotus and the Jim Clark Trust is being held in Clark's hometown of Duns to mark the 50 year anniversary of the Borderer's remarkable 1965 season - during which he clinched his second Formula One World Championship, a famous Indianapolis 500 victory, the Formula 2 Championship and the Tasman Championship. An incredible season at the time and unparalleled to this day.

McNish, who since retiring from front-line racing has become a respected broadcast commentator, is a Patron of The Jim Clark Trust, which is dedicated to promoting the inspiration and legacy of the late double Formula One World Champion.

Earlier this year The Jim Clark Trust announced plans plans for a new £1.2m redevelopment of the existing Jim Clark Museum by 2018 in partnership with Scottish Borders Council.

Dumfries-born McNish is keen to encourage Scottish race fans to back the event in big numbers and help kick-off the fundraising drive for the expanded museum, with the aim of showcasing the cars in which Jim Clark raced and the story behind his inspiration.
Looking ahead to the weekend McNish commented: "I am very much looking forward to visiting Duns for the Jim Clark Weekend on what is going to be a fantastic celebration of Jim's success. It will be really cool to see an extremely rare Lotus 38 similar to the Indy 500 winning car and classic Lotus F1 cars in which he claimed his World titles, cars that in his hands brought so much success and also pride to our country."

The line-up of attractions for the two-day event has now been finalised, with static displays of classic and modern Lotus sports cars outside the current Jim Clark Museum in Duns on Sat 16 May before the air is filled with the roar of engines by a live parade of rare Jim Clark race cars through the town on Sun 17 May. The event will run from 11am to 4pm on both days. In contrast to the race cars, a tractor parade is planned to celebrate Clark’s farming roots with the support of the local community.

Doug Niven, cousin of Jim Clark and Family Trustee, said: “The Jim Clark Trust is thrilled with plans to celebrate 1965 with the owners of some very special race cars happy to bring them to Jim’s hometown of Duns for the occasion. It is a unique combination of the international motorsport family coming together in partnership with a rural Scottish community.

“We are delighted that Sir Jackie Stewart and Allan McNish as Patrons of the Jim Clark Trust are joining us to support plans for the new £1.2m Jim Clark Museum, a facility of the size and quality which perhaps should have been put in place many years ago. Jim himself would probably be quite bemused by all the interest. It is quite incredible how his legacy still lives on and is cherished by many to this day. We would like to graciously thank all of those involved for supporting the weekend.”