Three Wins for the team at Monaco! 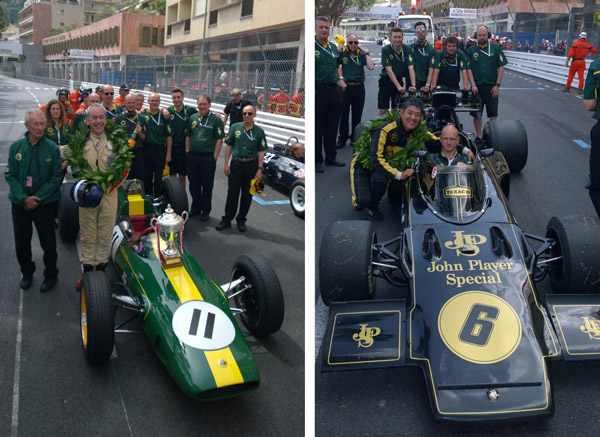 John Bowers was on hand to watch his Jim Clark type 25 starting from pole position and racing away to a dominant victory, in the capable hands of Andy Middlehurst. Mechanic Bob Dance - 79 on the Saturday of qualifying - had put himself under some pressure to realise a second Monaco win in a row, and was relieved to have got the job done.

Katsu Kubota drove his JPS Team Lotus type 72 brilliantly to secure pole position and lead from lights to flag, in one of the most hotly contended races of the weekend. A fantastic achievement for Katsu, his engine builder Hanashima san, and for Classic Team Lotus; especially lead mechanic Kevin Smith. (Sadly the type 49 of Chris MacAllister was damaged in qualifying and was unable to continue. However, she will soon be repaired and back on track.)

Dan Collins came first in class in the Pre 1966 F1 race, with a stirring drive to overcome an engine misfire. Before that, an overall podium finish had looked possible, together with team mate Andrew Beaumont in his type 24. Andrew started brilliantly and was up to second place – behind Andy Middlehurst – before a spin in the treacherous swimming pool complex forced him back down the order. Tim Gardner is lead mechanic on both the type 21 and the 24; he was pleased to see both cars finish, but there was a tinge of disappointment about what might have been.

In the Pre 1978 Formula One category Chris Locke qualified his type 77 very well in 10th place, with Andrew Beaumont just three places behind in his type 76. With 40 cars entered it was always going to be a challenging race and both Chris and Andrew found the 18 frantic laps very demanding. The team was delighted to cheer them home – especially Ted Fiddy and Lewis Cullington; lead mechanics to Chris and Andrew respectively – into 15th and 14th places.

Clive Chapman comments: “Chris Dinnage and the mechanics did a great job to prepare so many cars for Monaco. All six starters finished, which is most important. Three winners is a fantastic achievement for our customers and for us.”

So, all in all a good weekend for the Marque, at an event which grows in stature with each running. (If it is anything to go by – and we think it is – the yachts get bigger every time.) Well done to the Automobile Club de Monaco, well done to the Lotus drivers and well done to Classic Team Lotus.