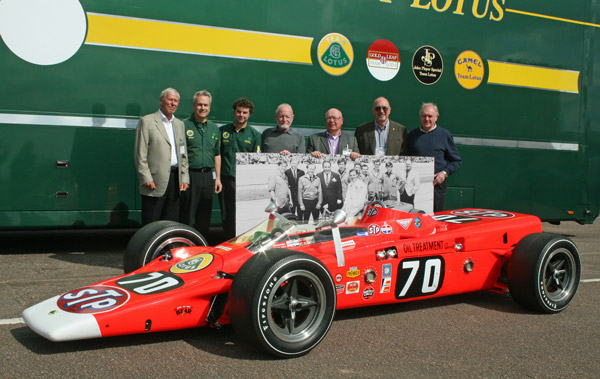 56/3 returned ‘home’ to Hethel in November 2013. New owner Milton Verret, of Texas, wanted the car restored to running mechanical condition and presented exactly as she was on race day, back in 1968.
With its unique resources of mechanics from the day, the original design drawings and photographic archive, Classic Team Lotus specialises in restoring cars to exactly period specification.

Lead mechanic Lewis Cullington has spent hundreds of hours disassembling, researching, restoring and rebuilding the car. Team Manager Chris Dinnage and buyer Roger Yallop have played vital roles in helping Lewis to conduct the restoration to the highest possible standard. Lewis has been helped in particular by apprentice Keiran Cook and new recruit Paul Reed. As the deadline has loomed large it has been all hands to the pumps, with all at Classic Team Lotus getting involved, to have the car ready for its departure to the States.

Extensive research in the course of the restoration has confirmed the provenance of the car as 56/3, Graham Hill’s car number 70. Every detail is exactly in accordance with the original Team Lotus design, created by Maurice Philippe, working together with Colin Chapman. Detail features unique to 56/3 are evident and consistent throughout the car.

Clive Chapman observes: ‘Once again, the Classic Team Lotus mechanics have done an exceptional job to restore a very famous Team Lotus racing car. We appreciate the owner entrusting us with the responsibility and we have lavished the appropriate amount of care and attention on this extraordinary car. As we delved deeper into the restoration it was rewarding to discover every detail of the car being consistent with her history.’

‘Furthermore it has been a pleasure to establish a working relationship with both Vince Granatelli and the Indianapolis Motor Speedway Museum, both of whom have been extremely helpful and encouraging. Happily Vince and I have managed to avoid the ups and downs that were a feature of the relationship between our mercurial fathers…so far.’

These six young men worked together throughout the demanding Indianapolis ‘Month of May’ with Colin Chapman and Fred ‘Flameout’ Cowley (Instigator of using the Pratt & Whitney gas turbine engine), running two Works cars.

Clive Chapman again: ‘Running a brand new, turbine powered, four wheel drive racer in America, first time out must have been a massive undertaking. Six young mechanics met the challenge head-on and everyone at Classic Team Lotus is impressed by what they achieved. They represent the dedication and ability that enabled Team Lotus to achieve so much in motorsport.’

‘We are honoured to host the Hethel reunion and grateful that they have made the effort to attend. We are looking forward to re-enacting the famous 1968 team photo.’

Parade
The Indianapolis Motor Speedway Museum has organised an exhibition in 2014 of all the gas turbine cars that were built to race at Indy. 56/3 will take its place in this illustrious line-up and, as a running car, will be paraded in front of the massive crowd at this year’s Indy 500, on race morning, Sunday May 25th.
Three type 56 cars will parade together, thereby creating a special moment of celebration for the famous history of the Team Lotus Marque at the ‘Brickyard’. Owner Milton Verret will be there to witness it, as will Clive Chapman – attending the Indy 500 for the first time, at the invitation of the Indy Motor Speedway Museum – and Vince Granatelli, who will be running the car.

The fourth type 56 – chassis 2 – was returned to Hethel after the tragic accident of Mike Spence in practise. It is uncertain what became of it. Previously it had been thought that the lightly damaged car had formed the basis for the Lotus type 56B, which raced in the 1971 F1 World Championship. However, with reference to many period images of 56/2, a detailed analysis of the 56B has revealed that 56/2 and the 56B do not share any common features. (Even so, the Indy Motor Speedway Museum has invited the 56B to join its Indy ‘cousins’ in the exhibition.)

Clive Chapman concludes: ‘I am grateful to the Indianapolis Motor Speedway Museum for inviting me to the race. I am looking forward to experiencing the Indy 500 first hand and imagining how it was for my father and the Team Lotus mechanics as they took on the challenge of the World’s greatest race. I am too young to have any memories of Mike Spence, but I will have him in mind during my visit.’