23/07/14 - Race one of the most recognisable and successful Formula One cars of all time, download the Lotus 72 today. 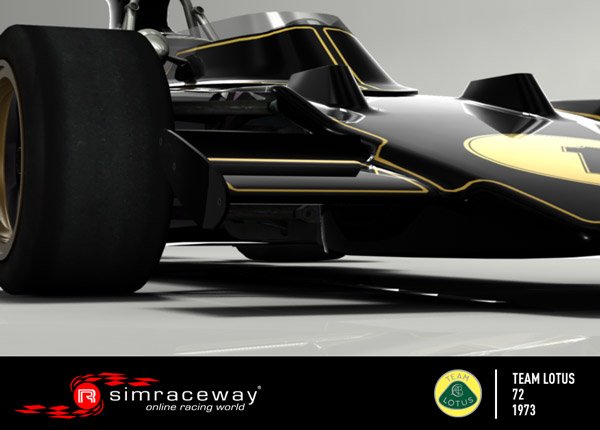 The sheer originality of the Lotus 72 led to its utter domination on the track. With six seasons, 74 races, 20 Grand Prix victories, two drivers’ championships and three constructors’ championships to its name, it’s hard to think of a more effective Formula One racer.

First introduced in the second race of the 1970 season, the Colin Chapman and Maurice Philippe-designed Lotus 72 exhibited the kind of pioneering features that quickly became synonymous with the British team. Its inboard brakes, side-mounted radiators, overhead air intake, and wedge-shaped, aerodynamic design together ensured it would become an F1 icon.

The car secured constructors’ and drivers’ titles in 1970 (Jochen Rindt) and 1972 (Emerson Fittipaldi). This 1973 specification, redesigned to accommodate new safety rules and displaying its striking new black-and-gold livery, carried the Brazilian World Champion to three race wins that, in combination with the four recorded by his team mate Ronnie Peterson, were enough to bring home yet another constructors title.

To race one of the most recognisable and successful Formula One cars of all time, sign up and download the Lotus 72 today on Simraceway.