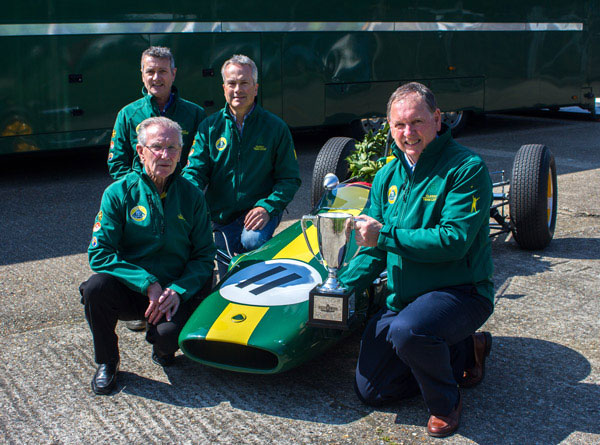 Winning the prestigious Goodwood Revival Glover Trophy race three years in a row with the ex Jim Clark type 25/R4 is an extraordinary achievement for John Bowers, Andy Middlehurst and Bob Dance and receiving the trophy from Lord March must be a fantastic feeling for Andy.

Owner of the type 25, John Bowers gets great pleasure from watching Andy bring his car home at the front of the appreciative crowd but we thought it would be nice to create a permanent memento of this always lovely occasion.

With the generous blessing and assistance of Goodwood, Andy and Classic Team Lotus set about creating a replica Glover Trophy for John to have at home in Australia.

We presented the replica to John at the 2014 Classic Team Lotus Monaco Historique at a party on the Saturday evening. (Yes, Clive Chapman and Chris Dinnage hijacked the Bob Dance 79th birthday party…)

The trophy features all of the winners of this prestigious race, starting with Reg Parnell in 1949. Team Lotus won three times - Innes Ireland 1960 and Jim Clark 1964 & 1965 until the race took a break after 1965, before Lord March revived the circuit in 1993.

We would like to thank Goodwood for enabling this to happen, especially Jo Willitt who was most generous with her help.

Did you know?
Jim Clark won the trophy in 1965, driving 25/R6, and set the circuit lap record in the process, matched by great friend Jackie Stewart. We like to think that, at Goodwood, Jimmy is 'Fastest Forever'.