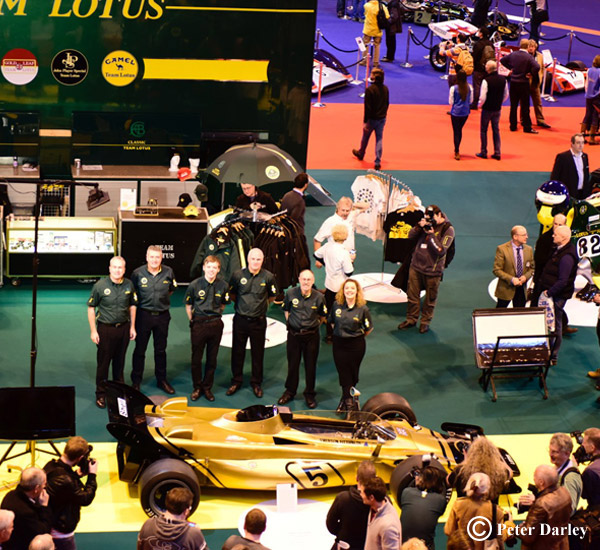 The Lotus type 56B is the only gas turbine powered car in the history of Formula One. Also it represents a rare experiment in four wheel drive and we are very pleased to announce; we have an engine!

The car is exactly as it finished racing – minus engine – and its blistered paintwork is testament to the 100bhp overrun of the engine. This will be preserved – spare bodywork will be used for running – and when the car comes alive again it is bound to generate a lot of interest.

The engine is an ST6 and was derived from the PT6, of which more units have been made than any other type of turbine - 51,000 - in the 55 years since it was first manufactured.

The engine is mounted in the car with the compressor aft and the power turbine forward. The exhaust funnel is immediately behind the driver’s head. The power take-off is from the front. The engine does not need water cooling and it can sit stationary at idle quite happily. No radiator facilitated the wedge shape.

The power turbine rotor is connected via reduction gears – which take the rpm down to about 6,000 - to a Morse chain drive transfer box, situated immediately behind the driver. A pulley - driven by the power turbine – is connected by a chain to an output pulley; different pulley diameters change the gearing.

Effectively the car is direct drive. Once the engine is started it is held stationary by the driver applying the brake. When the driver lifts off the brake then the exhaust gases are able to turn the power turbine rotor and the car is driven.

Tick-over is about 100 horsepower – something of a drawback for this application. (Note the blistered paintwork around the front brake discs!) The torque is huge and full power is about 500 bhp. In 1971, this was significantly more than the Ford Cosworth DFV was producing. The engine was thirsty so fuel capacity was a massive 350 litres of Kerosene, as evidenced by the bulging ancillary fuel tanks each side of the monocoque.

Colin Chapman loved the relatively low cost, efficiency, reliability and long life of the turbine engine. Half-jokingly he observed; “At last I have a reliable, powerful and cheap engine, so I will not have to keep spending all that money with Cosbodge and Duckfudge!”.