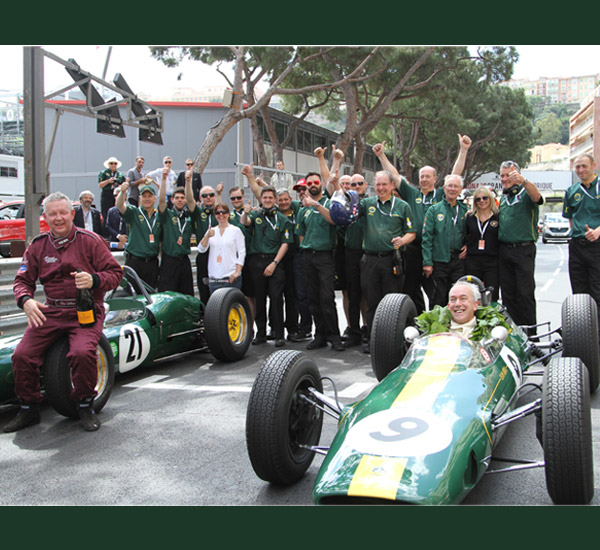 The event attracts entrants from all over the World, wanting the chance to race their classic F1 cars at the most famous circuit in the World, two weeks before the modern Grand Prix. Lap times are comparable to the speeds set by the heroes of yesteryear. Being Monaco, just the race entry fee is €5,000; even so, applications are heavily oversubscribed. Hethel based Classic Team Lotus prepared nine cars to race in three different categories.

The legendary Bob Dance – Team Lotus Chief Mechanic from the 60s, 70s, 80s and 90s prepared the 1963 World Championship winning type 25 for its Australian owner, John Bowers, to be raced by ex-British Touring Car driver Andy Middlehurst. The car started from pole position and, after a thrilling dice with a 1964 Ferrari F1, went on to a decisive victory.

Above: The team celebrating a victory and 3rd place

Chris Dinnage - Classic Team Lotus Team Manager was responsible for managing the preparation and transport of the nine Formula One cars from Norfolk to Monaco. Remarkably he tested all of the cars on the Lotus Cars test track prior to departure, to be sure that they were would be ‘on-the-button’ when they took to the most demanding of circuits for qualifying.

In the same category as the type 25 – for 1.5 litre F1 cars, pre 1966 – the team was delighted for longest standing customer Dan Collins to make it to the podium in third place, driving his 1961 American GP winning Lotus type 21, run by Andy Claydon. The Lotus type 24 prepared by Tim Gardner for Andrew Beaumont was tapped into a spin at the first corner – by a driver from Lincolnshire… - and the subsequent lap times set would have seen a dice between team mates for the third place spot.

The team’s previous winner of the pre 1974 category – Katsu Kubota of Japan, in his Ronnie Peterson Lotus type 72 – was pressured into a crash in qualifying, much to the disappointment of his mechanic, Kevin Smith. (By way of consolation, Kevin was lead mechanic on the restoration of the Lotus type 49 raced by Red Bull Technical Director Adrian Newey, who qualified 20th and finished 16th.) Happily, Katsu had an entry in his March F1 for the Pre 1977 category – prepared by mechanic Nick Yallop – and he finished in a strong second place. 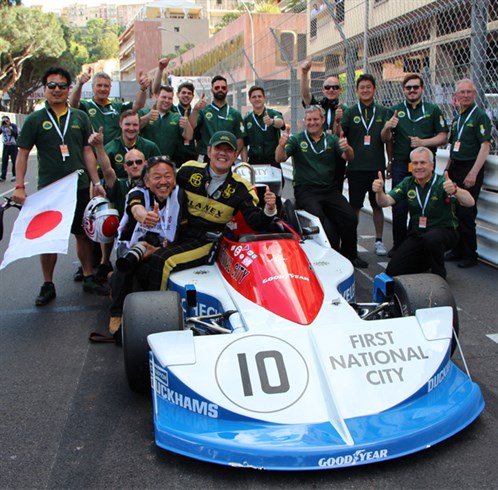 The team celebrating Katsu Kubota's second place in his March 761

Clive Chapman, Managing Director of Classic Team Lotus, commented: ‘To prepare nine F1 cars to race at Monaco is extraordinary. For eight to make it to the finish is fantastic and a testament to the capability and dedication of the hard working Classic Team Lotus mechanics. Oh, yes; .....and the drivers did well too!’ 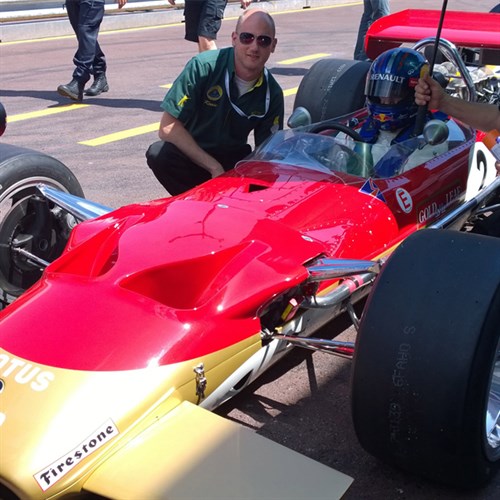