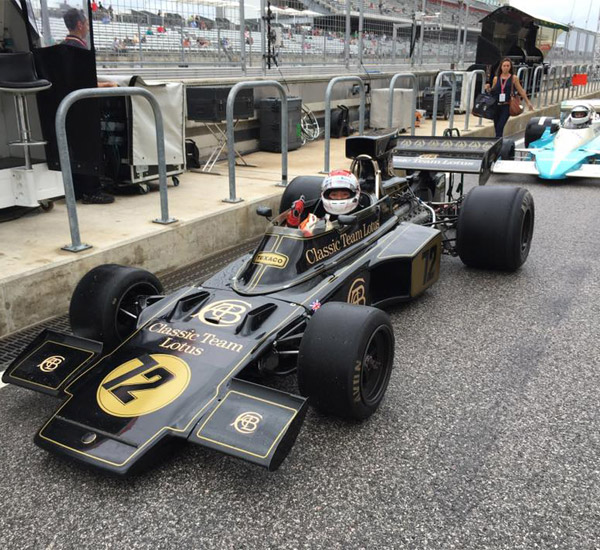 With a 36 car entry lined up to race, the grid of historic formula one cars looked impressive but the forecast for the weekend was not quite so optimistic.

Friday mornings first practice session went ahead as planned behind a leading car, allowing drivers to get their bearings around the fabulous 3.4 mile COTA circuit. The heavens opened on Friday afternoon which delayed the second practice session but, when it finally got underway late in the afternoon 31 cars were still in situ to take part. The track was wet to start with but was drying in places.  Katsu Kubota in his Lotus 72 set the quickest time, seemingly loving the wet conditions and the Texan track. Greg Thornton managed 4th quickest - just missing out on 3rd by 0.046 in his Lotus 91 and Andrew Beaumont took a very respectable 8th in his Lotus 76.

Saturday mornings qualifying session was cancelled due to the rain and so the grid for Race 1 was due to be set on the second practice session times. However, as F1 qualifying got more and more delayed it seemed less likely that the Saturday race would happen. Around 4pm all track activity was cancelled for the day.

The Sunday morning weather forecast promised an easing in the rainfall and an hour before the session it seemed like it would be dry enough to race, but, as the cars formed up in the paddock the heavens opened again. Although the cars went out on the track behind the safety car for 5 laps, the race never got underway and the red flag was put out as conditions worsened.