The first composite chassis F1 car to take to the track? 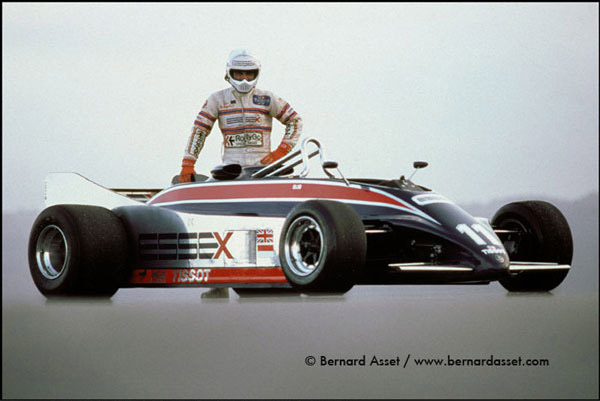 Rewind to the 1980 season and the ravages wreaked upon aluminium monocoques by the extreme forces resulting from undercar ground-effect aerodynamics and the associated extremely stiff suspensions adopted by the teams. Simultaneously the aerospace industry - always at the forefront of the weight versus strength battle - is developing the use of composite materials for use in aircraft. Cue Peter Wright and Martin Ogilvie, the leading engineers in the Team Lotus drawing office, to spot the potential and sell the idea to Colin Chapman. Already a champion of GFRP composite, Chapman encouraged Peter and Martin to go for it, and they embarked on a crash programme of teach yourself Carbon Fibre. (This included testing panels with ball bearings dropped from the castellated roof of Ketteringham Hall; highly technical.)

The type 88 monocoque was massively stronger than its aluminium predecessors and significantly lighter. A testament to the strength of the beautifully simple and elegant design is that all 10 examples of the original design survive today, despite having endured Nigel Mansell pushing them to and beyond the limits, as he was wont to do with any racing car.

As secret testing of the car continued, a rival team announced their car for 1981 season, which became the second composite chassis F1 car to take to the track, heralding a rush to composite by the Team Lotus competition.

The first Grand Prix for the type 88 was the season opener in Long Beach, USA. Not only was the type 88 the first composite F1 car it also featured a twin chassis design which drove a coach and horses through the rule makers' attempts to limit the massive downforce created by ground effect. This caused a political storm to brew, which broke in Long Beach and resulted in the type 88 not being allowed to race. Much to the disgust and disillusionment of Colin Chapman the type 88 was never allowed to race and eventually was ruled as illegal.

You can dream of something. You can design something. You can make something. But putting it to the test by using it is the mark of realising something, and on the 23rd February 1981, without any fanfare, Elio De Angelis changed F1 forever, by driving the latest in a long and illustrious line of Team Lotus innovation, which happened to be the first composite chassis F1 car to take to the track.