JPS Lotus Downforce heads down Catesby Tunnel... and back

Chris Dinnage of Classic Team Lotus set a World first by driving a JPS-liveried Team Lotus Formula 1 car down a 2.7km closed tunnel, then turning around and heading back, all alone.

Just before Christmas, Chris Dinnage of Classic Team Lotus set a World first by driving a JPS-liveried Team Lotus Formula 1 car down a 2.7km closed tunnel, then turning around and heading back, all alone. (Follow the links below for video footage.) 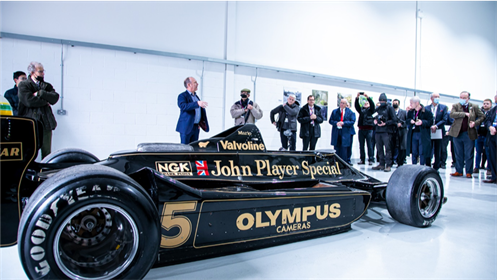 Classic Team Lotus was invited to conduct this extraordinary outing to mark the occasion of the official opening of the Catesby Tunnel test facility in Northamptonshire.

Chris heads into the tunnel

The Catesby Tunnel is a unique facility, established by Catesby Projects, in Northamptonshire. George Howard-Chapell – formerly of Team Lotus – reckoned the type 79 was just the car for the occasion, especially because the opening ceremony was to be conducted by Peter Wright – the father of ground effect in F1 – and Mike Costin, the co-founder of Cosworth. A most distinguished pairing of motorsport greats (given the time of year, their coming together could be considered as something of a Lotus type 79 Pantomime Horse; Peter responsible the front end (the aerodynamics), Mike at the rear (the horsepower, appropriately). 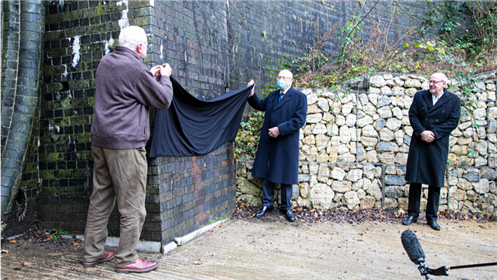 Chris set-off in 79/3 with a spectacular standing start and headed down the tunnel at speed. At the end he stopped on a turntable, used the remote control he had in the cockpit to activate a 180 degree rotation, then headed back. Once the car was half way down the tunnel it became out of ear shot to the spectators and the gathered crowd were relieved when the eerie silence was broken as Chris returned. An extraordinary experience for Chris to add to his many adventures with Team Lotus and Classic Team Lotus, over the years. (We have always fancied testing the theory that a ground effect car should be able to drive across the ceiling of a tunnel, but we need a long, round tunnel and don't think Monaco would work……..shall we ask Chris if he fancies another go at Catesby, with a difference?)

Chris gets the Type 79 off the line in some style...

....and brings it home with a new lap record!